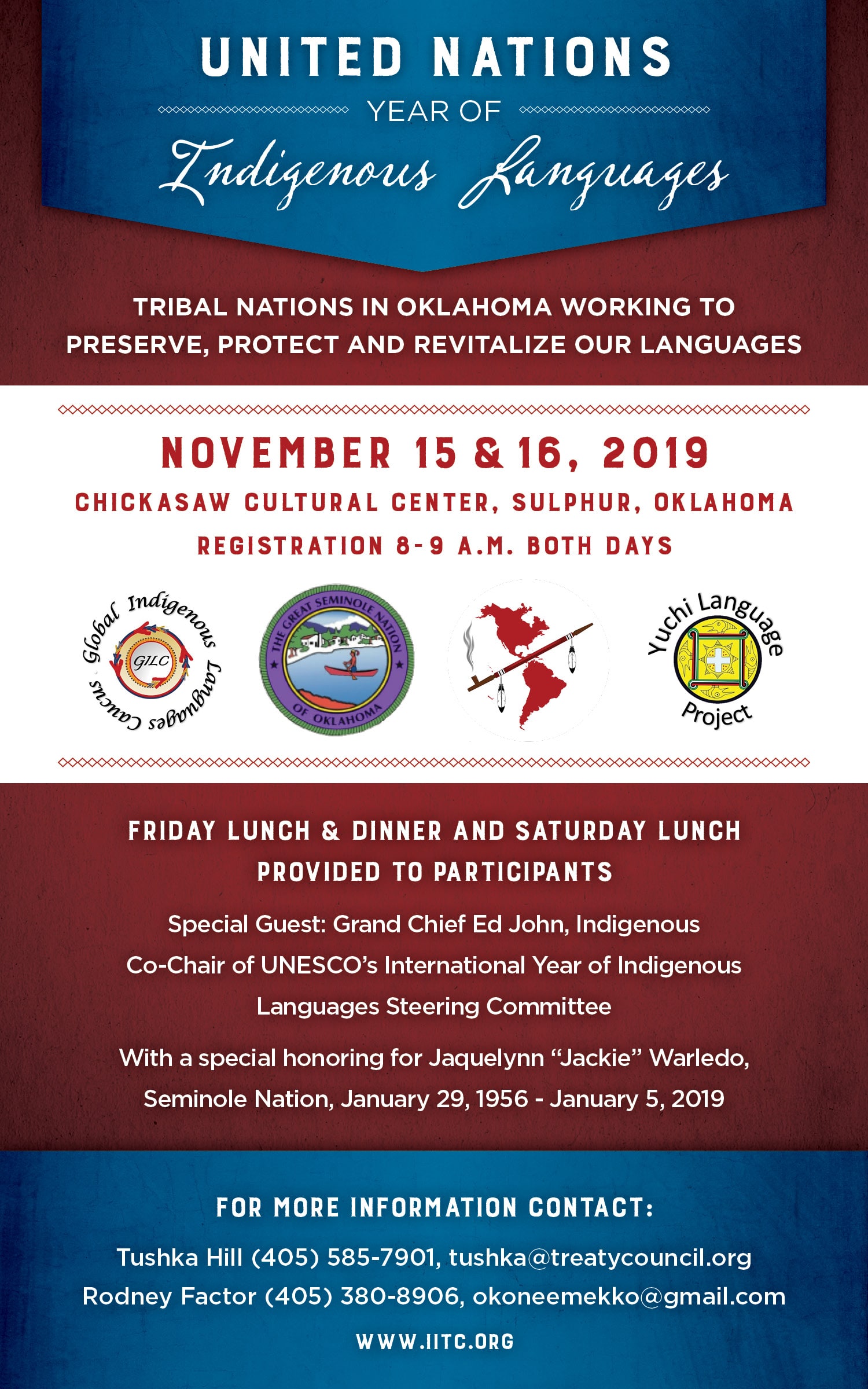 Event is FREE!
Registration is Required

Rooms are available at a special rate at the Treasure Valley Hotel and Casino.
Use passcode OK Language Conf 2019 for special rate.

The International Indian Treaty Council (IITC), the Chickasaw Nation, the Great Seminole Nation of Oklahoma, the Global Indigenous Languages Caucus and the Yuchi Language Project are pleased to announce that we will be co-hosting the United Nations International Year of Languages: Tribal Nations in Oklahoma Working to Preserve, Protect and Revitalize Our Languages Gathering at the Chickasaw Cultural Center in Sulphur Oklahoma on November 15 and 16, 2019.

The International Year of Indigenous Languages was declared by the United Nations General Assembly on Dec. 19, 2016 to draw attention to the urgent need to preserve, revitalize and promote Indigenous languages.

Topics for presentation and discussion will include the right to language, the impacts of historical trauma on Indigenous languages in Oklahoma, and ensuring the next generation of fluent speakers, among many other topics. Recommendations made during this conference will be brought back to our Tribes and presented to the United Nations for the International Year of Indigenous Languages.

Special guest of honor at the conference will be Grand Chief Ed John of the Tl’ azt’ en Nation who serves at the Indigenous Co-Chair of UNESCO International Year of Indigenous Languages Steering Committee. In this context, Grand Chief John has noted the core importance of developing fluency in our communities: “There’s been a large focus on literacy, developing books and calendars and dictionaries in indigenous languages… but not as much of an effort in fluency.”

The event is FREE and, registration to attend is required as space is limited. Food will be provided for the first 180 registered participants. If you would like to present, register as a presenter, and we will be in contact with you.

For more information on booking lodging with a special rate at the nearby hotel got to www.iitc.org.

(“if we work together we can keep our Indigenous languages moving forward,” as expressed in Yuchi language)

We look forward to seeing you in Oklahoma.