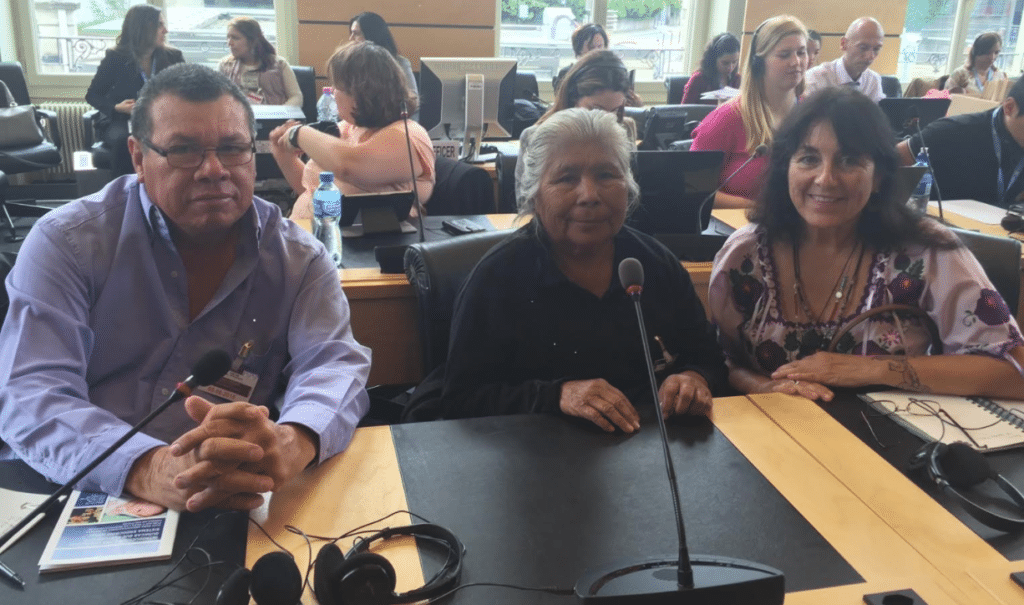 IITC’s delegation to the Committee on the Rights of the Child in Geneva, May 19, 2015, presented on the impacts of toxic pesticides used on children in Rio Yaqui Sonora, Mexico. From left to right, Francisco Villegas Paredes, Aurelia Espinoza Buitimea, and Andrea Carmen.

July 13, 2020, Tucson, Arizona: On July 9th, 2020, the United Nations Special Rapporteur on Human Rights and Toxics, Baskut Tuncak, issued a statement declaring that “the practice of wealthy States exporting their banned toxic chemicals to poorer nations that lack the capacity to control the risks is deplorable and must end.” His statement was endorsed by 35 other UN Human Rights Council experts including the UN Special Rapporteur on the Rights of Indigenous Peoples, Francisco Cali Tzay. It confirmed that in 2019 at least 30 States (countries) exported hazardous substances that had been banned in their own countries due to health and environmental reasons to Latin America, Africa and Asia.

Since 2001, the International Indian Treaty Council (IITC) has persistently addressed the detrimental and often deadly impacts of the export of banned pesticides by the U.S. and other countries on Indigenous Peoples in Mexico, Guatemala, Ecuador, and other countries, as well as in the Arctic region where many of these chemicals accumulate. In December of that year, IITC hosted a meeting with Indigenous Peoples and the first UN Rapporteur in this role, Ms. Fatma-Zohra Ouhachi-Vesely, during her official visit to the United States. Addressing the U.S. practice of exporting pesticides that it has banned for use in its own country due to their known deadly health impacts, a practice which continued to be permitted under U.S. and international law, she stated that “Just because something is not illegal, it may still be immoral. Allowing the export of products recognized to be harmful is immoral.”

The IITC, in coordination with its affiliate Jittoa Bat Natika Weria and the Yaqui Traditional Authorities in Rio Yaqui Sonora, Mexico, has collected over 90 testimonies from impacted Yaqui community members, including over 40 addressing deaths, severe birth defects, childhood cancers such as leukemia, and other deadly illnesses affecting Yaqui children, caused by the use of highly toxic pesticides, including aerial spraying and burning of contaminated crops by agri-business companies operating around the Yaqui Pueblos. These testimonies have been presented to the UN Committee on the Rights of the Child (CRC), the UN Committee on the Elimination of Racial Discrimination (CERD), the UN Permanent Forum on Indigenous Issues (UNPFII), as well as to the UN Special Rapporteurs on Human Rights and Toxics, Health, Food, Environment and the Rights of Indigenous Peoples, over many years.

In 2015, for the Committee on the Rights of Child’s country review of Mexico, IITC sponsored a delegation from Rio Yaqui Sonora, Mexico, including a traditional midwife, to present 39 cases of deceased and dying children from the use of toxic pesticides in the Yaqui homelands. As a result, the CRC called upon Mexico to halt the import of pesticides that have been banned by the exporting country and to work with Yaqui and other impacted communities to address their health impacts. The CRC also recognized for the first time that “Environmental Health” is a right protected under the Convention regarding child and maternal health.

In 2018, IITC also worked with the UNPFII to adopt a resolution requesting the Special Rapporteur on Human Rights and Toxics, also known by the mandate’s full name as “Special Rapporteur on the implications for human rights of the environmentally sound management and disposal of hazardous substances and wastes (toxics),” to carry out a legal and human rights review of the UN, based on the rights affirmed in the UN Declaration on Rights of Indigenous Peoples, the UN Convention on the Rights of the Child, the International Convention on the Elimination of All Forms of Racial Discrimination and the Convention on the Rights of Persons with Disabilities. The UN Rotterdam Convention permits the international trafficking of banned and highly restricted pesticides and other toxic chemicals.

Mariano Ochoa Millan, IITC Board member and former governor of the traditional authorities of Torim Pueblo, Rio Yaqui Sonora, Mexico, welcomed the Special Rapporteur’s statement: “So many of our Yaqui children have died and suffered lifelong disabilities from exposure to toxic pesticides that were banned by the countries that exported them to be used in our territories”. We hope that the Rapporteur’s communication will change these policies and will result in respect for our rights as Indigenous Peoples to a healthy environment,” he said.

UN Special Rapporteur Tuncak, in his July 9th UN News Release, noted that “wealthier nations often create double standards that allow for the trade and use of prohibited substances in parts of the world where regulations are less stringent, externalizing the health and environmental impacts on the most vulnerable… It is long-overdue that States stop this exploitation.” Noting the racialized aspects of this practice on developing and third world countries in Asia, Africa Latin America, he added that “Failing to address this longstanding exploitation is discrimination, pure and simple.

For the full text of the UN News release, log on to: https://www.iitc.org/un-states-must-stop-exporting-unwanted-toxic-chemicals-to-poorer-countries/