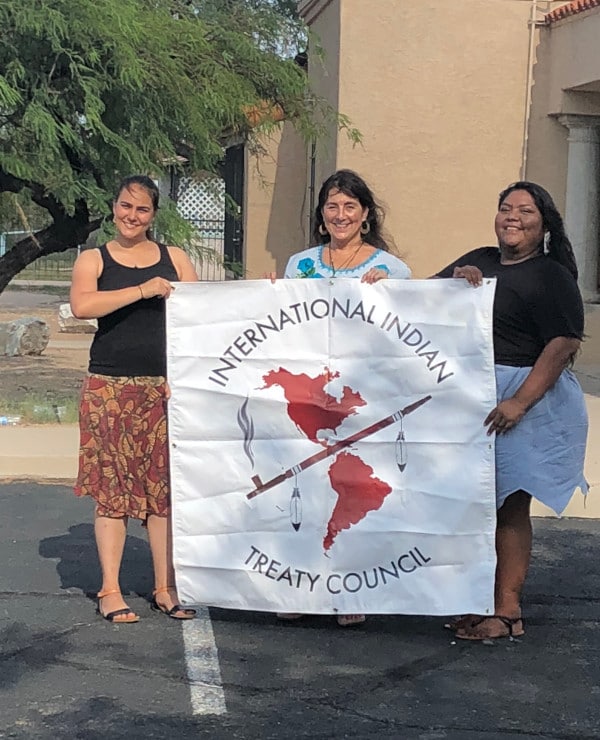 September 24, 2018, Tucson, Arizona:  On September 29th, 2018 the International Indian Treaty Council (IITC) will celebrate a new phase in its history with the official opening of a new office in Tucson, Arizona.  Thanks to generous donations by two long-standing supporters and the assistance of the Non-Profit Loan Fund of South Arizona, in April of this year IITC was able to purchase an office building located at 100 E. Ajo Way in Tucson, Arizona, 85713.   The building has undergone some needed renovations and is now ready to open as IITC’s permanent home and principal base of operation.

Peter Yucupicio, Vice Chairman of the Pascua Yaqui Tribe, voiced his support for the new office in Tucson.  “We are very appreciative that the International Indian Treaty Council, an organization that stands up for the human rights of Indigenous Peoples and Tribes all over the world, will now have a permanent office in Tucson.  Their presence here will support the struggles that many Tribes are facing, including repatriation of our sacred items and regalia, border issues, protecting sacred sites, and water rights.   We look forward to working with the IITC on these important concerns affecting the Yaqui and other Tribes in this area, and warmly welcome their new office in Tucson.”

Amy Juan, Tohono O’odham Nation, and IITC’s Tucson Office Manager, explained the importance of the new office for Tribal Nations in the Tucson area.  “Since I began working with IITC this year, I’ve helped with several IITC human rights trainings and presentations for Tohono O’odham and Yaqui youth and communities. It is so exciting, and such an honor to be a part of IITC’s commitment to creating new generations of Indigenous human rights advocates. The new IITC office will provide a foundation for us to expand and strengthen this work, and I am very proud to be a part of this new phase of IITC’s history.”

The IITC has received congratulatory messages from diverse voices.  On August 24th IITC received an email message from the Mexican government’s Ministry of the Interior (SEGOB) through the Commission for Dialogue with Indigenous Peoples of México (CDPIM) which read (translated) in part “This Commission endorses your openness and distinction in keeping the doors open to work with organizations such as yours that are distinguished by the struggle and defense of the rights of Indigenous Peoples and Communities and for which we wish you much success in your mission and in the opening of your new headquarters in Tucson. Congratulations!”

The September 29th Tucson Office opening will include a traditional blessing ceremony, distinguished speakers, special guests, food and music.  For the full program and agenda please go to  IITC’s website.  IITC has also launched a campaign on GoFundMe to support this significant step in its organizational development and its ongoing work.  To find out how to support this campaign, click on International Indian Treaty Council GoFundMe.

Founded in 1974 on the Standing Rock Reservation in South Dakota, IITC is an organization of Indigenous Peoples from North, Central, South America, the Caribbean and Pacific working for the Sovereignty and Self Determination of Indigenous Peoples and the recognition and protection of Indigenous Rights, Treaties, Traditional Cultures and Sacred Lands.  In 1977 IITC was the first Indigenous Peoples’ organization to receive Consultative Status with the UN Economic and Social Council (ECOSOC) and in 2011 was the first to be upgraded to General Consultative Status.  IITC primary programs are Defending Human Rights, Environmental Health, Food Sovereignty, and Treaties and Standard Setting.

IITC’s Board members, staff and affiliates thank our many friends, allies, colleagues and supporters who have expressed congratulations and best wishes for this very significant step forward, and all those whose contributions and hard work have made this possible.