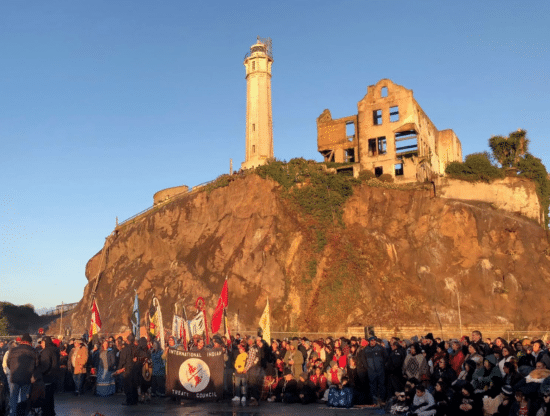 IITC’s Sunrise Gatherings on Alcatraz Island on October 8th and November 22nd 2018, were attended by over 6000 participants. Photo by Anesti Vega.

October 7, 2019, San Francisco, CA:  On January 7, 1851, California’s first Governor, Peter Hardeman Burnett delivered his Second Annual Message to the Legislature calling for a “war of extermination” as California’s official policy that “will continue to be waged between the two races until the Indian race becomes extinct, must be expected.”  This policy, sanctioned and funded by the State of California, resulted in the widespread attempted extermination of California’s diverse Indigenous Peoples.

168 years later, Ms. London Breed, San Francisco’s first African-American woman Mayor made history by acknowledging the widespread historic brutality against California’s Native Peoples and affirming the vitality and resilience of Indigenous Peoples in a Proclamation recognizing Indigenous Peoples Day (IPD) as an alternative to “Columbus Day” in San Francisco, “Yelamu” in the language of the original Ohlone Peoples of the Bay Area.  She presented the Proclamation on October 8, 2018 at a gathering organized by the International Indian Treaty Council (IITC) at Yerba Buena Gardens in San Francisco, officially designating the 2nd Monday in October as Indigenous People’s Day. “This is a small but significant step in rectifying the incredible atrocities and genocide carried out against California’s First Peoples, and one that has been a long time coming,” said Morning Star Gali, IITCs California Tribal and Community Liaison and member of the Pit River Nation at the 2018 event.

San Francisco has now joined a growing number of cities that are formally recognizing this country’s original inhabitants and challenging “Columbus Day” myth of discovery.  In the Bay Area, Berkeley was the first city to declare Indigenous Peoples Day at an alternative to Columbus Day in1992, on the occasion of the Columbus Quincentenary.  Last year Los Angeles also removed Columbus Day and replaced it with Indigenous Peoples Day.  South Dakota is still the only state that recognizes “Native American Day” in lieu of Columbus Day.

The growing recognition of Indigenous Peoples’ unique histories, struggles and rights can be traced back to the 1969 occupation of Alcatraz Island, the former site of the infamous federal penitentiary whose first inmates were California Indians resisting the genocide of their Peoples.  The occupation was initiated by Indigenous students and other young activists from the Bay Area, calling themselves “United Native Americans” as the descendants of the survivors of genocide, residential schools and forced relocation carried out in California and throughout the US.  They were joined by young Indigenous activists from around the US, occupying the island for 19 months.   They issued the “Alcatraz Proclamation” to announce their action to the world, citing the Indian Termination policy as well as U.S. violations of numerous Indian treaties.

IITC has organized two annual Sunrise gatherings on Alcatraz Island for over 30 years.  The October 14th, 2019 Indigenous Peoples Day gathering will commemorate 527 years of Indigenous resistance in the Americas and will honor the 1969 Alcatraz occupation veterans and their families. It will celebrate the survival and vitality of Indigenous cultures and will include California Native and Mexica dancers, drummers, speakers and musicians highlighting issues impacting Native communities including protection of sacred sites, justice for Missing and Murdered Women, climate change, and criminalization and militarization at the US/Mexico border.    Boats will leave for the Sunrise Gathering from Alcatraz Cruises, Pier 33, at 5:00, 5:15 and 5:45 AM, and tickets are available via Alcatraz Cruises web page at: https://www.alcatrazcruises.com/programs-and-events/annual-events/indigenous-peoples-sunrise-gathering/.  The program will also be aired live on KPFA, 94.1, or online at kpfa.org for those unable to attend.

Later that day, IITC will partner with the San Francisco Arts Commission and American Indian Contemporary Arts to hold a 2nd Indigenous Peoples Day event at Yerba Buena Gardens in San Francisco from 12 noon – 3 PM.  For more information on that event, link to: https://ybgfestival.org/event/indigenous-peoples-day-2019/.    All events are handicap accessible and open to the community and the public.  For more information link to https://www.iitc.org or IITC media contacts Morning Star Gali [email protected] or Rochelle Diver [email protected].