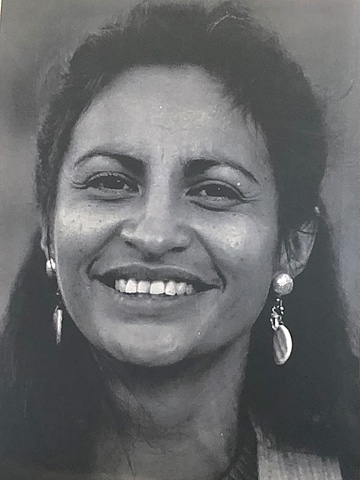 Family, Friends, the Seminole Nation, Oklahoma community members and the Indigenous Movement around the world are mourning the passing of Jacquelynn “Jackie” Warledo, Seminole Nation Tribal Citizen of the Wind Clan.   Jackie was a loving and beloved Mother and Grandmother, a loyal friend and a tireless, fearless Warrior for the Rights of Indigenous Peoples. She was born on January 29, 1956 and passed away in Oklahoma City after a sudden illness on January 5th, 2019.

At the time of her passing, Jackie was the Finance Coordinator for the International Indian Treaty Council (IITC), an Indigenous Peoples Human Rights Organization in Consultative Status to the United Nations Economic and Social Council.  She served as a member of IITC’s Board of Directors and was Board Treasurer from 2001 to 2006.  She served as an IITC delegate to many international gatherings, including the UN Commission on Human Rights.

Jackie was an Indigenous Environmental campaigner addressing toxic production for many years and, and worked with many Indigenous organizations, Tribal Nations and environmental organizations, as well as at the United Nations in negotiations for the Stockholm Convention, a global treaty addressing Persistent Organic Pollutants that went into force in 2004.

Jackie was a co-founder National Council member of the Indigenous Environmental Network (IEN) as well the IEN Oklahoma Regional Council (ORIEN). She was an active participant and conference organizer for the Indigenous Youth and Elders gatherings for many years. In 1999 she was a co-producer of an award winning educational video on the impacts of persistent organic pollutants on Indigenous peoples, “Drumbeat for Mother Earth” which has been shown all over the world including at the United Nations.

Jackie was a dedicated participant in activities of the Seminole Nation as well as in many grassroots community organizations in Oklahoma. In the last year she served as acting Tribal Secretary.  She also worked as the communications director for Seminole Nation of Oklahoma’s businesses which included media communications, marketing, editor for monthly newsletter, the production of a weekly radio program and oversight for the development of a tribal web site.  Jackie was also a co-founder and active participant in the Seminole Sovereignty Protection Initiative.  She was dedicated participant in her traditional cultural ceremonial activities and was a famously good cook at home and at her traditional camp.

She is survived by her beloved sons David Tahchawwickah and Tushka Hill; four beautiful grandchildren Tawney, Jack, Paul, Kunchatee and Shaylah; sisters and brothers Billy Williams,  Lela, Martha, Johnny and Calvin Warledo; nieces and nephews, and many loving friends and co-workers.  She is preceded and will be welcomed into the spirit world by her parents Georgia Harjo and Jack Warledo, grandparents, brother Carl Hopper, Scotti Ross, Jimmy Warledo, Johnson Warledo and other aunts and uncles, and many leaders and friends from the Indigenous Peoples movement including Phillip Deere, Bill Wahpepah, Jan Stevens and Nilak Butler.

An all-night wake and visitation will take place beginning Tuesday January 8th at 5 PM, Seminole Nation Mekusukey Mission Gym, 2566 NS 3540, Seminole.  Funeral services will be held that at 1 PM on Wednesday January 9th.   Jackie’s final resting place will be at the Hill Family cemetery in Sasakwa.

Donations can be made to assist the family with funds to cover their expenses at a Go Fund Me site that has been set up for this purpose.  Log on to: https://www.gofundme.com/help-honor-the-memory-of-jackie-warledo?member=1441346

Message on the passing of Jackie Warledo to her family and Nation from the Board President of the International Indian Treaty Council, (Ambassador) Francisco “Pancho” Cali Tzay, Mayan Kaqchikel, Guatemala

Read at the funeral services for Jackie on January 9, 2019, Seminole Oklahoma by IITC Board Member Ron Lameman.

In the most critical moments of the situation of violence for the civilian population in Guatemala, especially the Mayan Peoples in the mid-80s, I met three women who gave me a pretty big impression.  They looked smiling, cheerful and they conveyed a sense of confidence, but what struck me most was … it was that feeling of conviction and struggle, with a cultural and historical tradition in their faces that impressed me. I had always heard about the beauty of Indigenous women in the United States, there I had three of his expressions in front of me, Jackie, Nilak, and at the moment, the memory of the third name fails me, but beautiful as the two of them. Beautiful, fighters and resistant to colonization that had been and was being suffered by the Indigenous Nations in the United States.

After a long time I started to know the history of Jackie’s People, the Seminole Nation and I even visited their territory several times.  I will not say more, since many brothers and colleagues have talked about the history and life of Jackie.  I’m just going to say: Jackie, the Creator has called you, you are with the grandparents and grandparents and you will be our company now, in our thoughts and prayers to the Creator, you will be our guide. See you soon Jackie, I am sure we will meet, you have advanced all of us in this terrestrial life, and we will follow your footsteps. Rest in peace.

On behalf of the IITC Board of Directors: