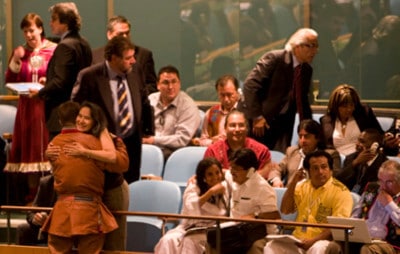 Indigenous leaders at the final adoption of the United Nations Declaration on the Rights of Indigenous Peoples on September 13, 2007

When the UN Declaration on the Rights of Indigenous Peoples was adopted by the UN General Assembly 10 years ago today, the IITC was relieved if not quite elated.  We were relieved that the 30+ year struggle to achieve this affirmation of the minimum standards for our survival, dignity and well-being at the UN had finally concluded.  The IITC was disappointed, although not surprised, by the “no votes” registered by the US, Canada, Australia and New Zealand (although later reversed) and some last minute, unwelcome wording inserted by States. However, we also remembered and were grateful to the leaders that had initiated and contributed their words, courage and living spirits to the development of the Declaration but did not remain in this physical world to see it through to adoption. They inspired and guided us from the spirit world during this decades-long process and continue to do so today as we work for its implementation.
Then, as now, there is much to celebrate in the Declaration, including the hard-fought and historic achievement of full participation in its development by Indigenous Peoples, and its undiminished recognition of Indigenous Peoples’ inherent collective rights to self-determination, Treaties, lands and resources rights, cultural rights and so much more.

While some of us were restrained in our celebration by thoughts of what we had not been able to fully achieve in the final text, or those last-minute additions by States that we had hoped to avoid, we were reminded by one of our Chiefs that the “minimum standard” as affirmed in Article 43 meant that “the Declaration is not the ceiling, but is the floor”, a solid floor we had not had before September 13th, 2007.  What really matters is implementation.  We were clear then, as now, that the bulk of the heavy lifting in that regard would need to be carried out by us, the Indigenous Peoples and Nations.  And looking back over the last 10 years, there are many major milestones and achievements to celebrate, as well as many challenges that remain looking ahead.
Progress has been notable and in some cases remarkable.  Throughout the UN systems, even in processes which have been challenging for the rights of Indigenous Peoples to gain a firm foothold, for example the UN Framework Convention on Climate Change, the voices of Indigenous Peoples are not only being heard but are being included in discussions and decision making that would affect our rights in accordance with Article 18.  The Organization of American States’ American Declaration on the Rights of Indigenous Peoples, adopted in June of 2016, included the UN Declaration’s strong affirmation of Indigenous Peoples’ right to “the recognition, observance, and enforcement” of their Treaties with States, but expanded the recognition of this right in Article 24 to include the “original spirit and intent” of Treaties. The American Declaration also calls for international redress for Treaty disputes, which can’t be resolved between Parties, further strengthening the international recognition of Treaty Rights based on the UN Declaration.
UN Treaty Bodies, especially the Committee on the Elimination of Racial Discrimination (CERD) but also including the Human Rights Committee and the Committee on the Rights of the Child, are using the UN Declaration as a lens to assess States’ compliance with these legally binding Conventions regarding the rights of Indigenous Peoples.  The CERD has gone further, calling on several States to develop and implement National Action Plans for implementation of the UN Declaration in conjunction with Indigenous Peoples.  Other international bodies including the UN Food and Agriculture Organization, the UN Committee on Food Security, the International Labor Organization, UN Educations, Scientific, and Cultural Organization (UNESCO) and the UN Working Group on Business and Human Rights have increasingly referred to the UN Declaration in their standard setting and decision-making as well as their inclusion of Indigenous Peoples in their processes.
However, despite a few notable signs of progress, what remains as the biggest obstacle to full realization is the lack of political will by States at home.  It is no wonder that the hardest fought provisions of the Declaration are those that many if not most States continue to resist.  These include Free, Prior and Informed Consent regarding resource development, land and resource rights, and self-determination in accordance with international law.  Achieving consistent mechanisms for international repatriation of our sacred items and human remains as stipulated in Articles 11 and 12, as well as in the outcome document of the World Conference on Indigenous Peoples, while under discussion, remains elusive.  So does full legal recognition of Indigenous Peoples’ rights to others aspects of their cultural heritage including their “intellectual property” despite the affirmations in Article 31.
But at least these discussions are now underway at the United Nations, and Indigenous Peoples are now sitting at those tables.  We have, in the UN Declaration, a strong tool affirming our inherent rights as we continue to move forward, step by step, towards the full realization and implementation of these and other inherent rights. Again, the political will of States to fulfill their commitments and implement this Declaration in these UN processes, as well as on the ground, is critical, especially in these times when imposed resource development and human rights violations are increasing simultaneously, usually hand-in-hand.
The IITC pauses in its work for a moment today to reflect on what was achieved and what needs to happen next.  Long live the UN Declaration on the Rights of Indigenous Peoples and the Indigenous Peoples in all regions of the world who are struggling to implement the inherent rights it affirms!  Our future generations will be the ones to construct the ceiling according to their own needs and unbounded aspirations.  The United Nations Declaration on the Rights of Indigenous Peoples provides them a strong floor to stand on as they do so.