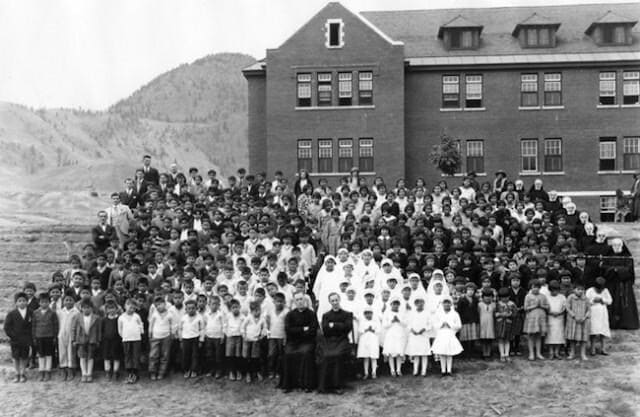 Edmonton, Alberta Canada: The International Indian Treaty Council (IITC) joins the Tḱemlúps te Secwépemc, the Indigenous Nations of Canada, and the international community in expressing our horror and outrage at the discovery of a mass burial site containing the remains of 215 children who attended the Kamloops Indian Residential School in British Columbia, Canada.  These children are among the thousands of Indigenous children who were forcibly removed from their homes but who never returned from these schools.  There were 146 such residential schools open from 1834 to 1996 in Canada established under the legal mandate of the Canadian government. Over 60% of these schools were operated by the Catholic church.

Our hearts go out to the families who are reexperiencing the impacts of these atrocities firsthand.  We know that the necessary ceremonies and cultural protocols are being carried out and respected.  We also stand with all the Indigenous Nations throughout Canada as they continue to seek justice and accountability for their lost children, and finally bring them home.

Justice Murray Sinclair who headed the Truth and Reconciliation Commission on the Canadian Residential Schools told the Canadian Press on May 31, 2015 that the Canadian government stopped recording the deaths of children in these schools in 1920.  He estimated that at least 4,000 – 6,000 children died at the residential schools but stated that it was impossible to say with certainty, due to lack of government information.

Ron Lameman, Beaver Lake Cree Nation, in Alberta was forcibly taken from his family to the Ermineskin Indian Residential School at age 11.  He now serves as the Bilateral Treaty Coordinator for the Confederacy of Treaty 6 First Nations based in Edmonton and is also IITC’s Board President.  Ron stated that “what the Canadian government carried out against the original Nations of Canada, targeting our children for forced removal, cultural alienation, trauma, abuse, and in many cases death, constitutes the crime of genocide”.  Ron stated today that the Treaty 6 Grand Chief Okimaw Vernon Watchmaker has written a formal letter to the United Nations Special Rapporteur on the Rights of Indigenous Peoples, Francisco Cali Tzay, inviting him to visit Treaty 6 Territory to review the situation of the still missing children who may lie in clandestine cemeteries near the 25 Residential Schools in Alberta, the most of any Canadian province.

Tk’emlúps te Secwépemc Kukpi7 Rosanne Casimir also welcomed the engagement of the international human rights community including the United Nations Special Rapporteur on the Rights of Indigenous Peoples. Kukpi7 Rosanne states that “the involvement of the United Nations will help ensure that Canada takes true and meaningful action and commitment” to address this situation, which has retraumatized many of the residential school survivors and their families in her community and in Indigenous Nations across the country.

The IITC will continue to monitor this horrific situation closely.  We offer our support to Tḱemlúps te Secwépemc and all the Indigenous Nations of Canada as they find strength for the painful process of bringing their loved ones home.  We also support their call for adequate resources and complete information from both the churches and the Canadian government to assist their efforts to find the children that are still missing and bring about justice for the crimes that occurred.