Towards the International Year of Artisanal Fisheries and Aquaculture (IYAFA 2022) 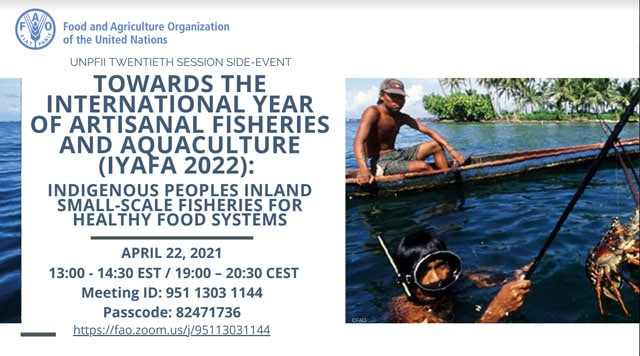 Frank Ettawageshik served in tribal elected office for sixteen years, fourteen as the Tribal Chairman of the Little Traverse Bay Bands of Odawa Indians in Harbor Springs, Michigan. During his tenure as Tribal Chairman he was instrumental in the adoption of the Tribal and First Nations Great Lakes Water Accord in 2004 and the United League of Indigenous Nations Treaty in 2007. Recently he was appointed Tribal Court Appellate Justice for his tribe.

Since 2009 Frank has been serving as the Executive Director of the United Tribes of Michigan. He also serves on the board for the Association on American Indian Affairs, the Michigan Water Use Advisory Council, and on the Great Lakes Water Quality Board of the International Joint Commission. In 2017 he was appointed to the Environmental Justice Working Group by Michigan Governor Rick Snyder. Internationally, he has represented the National Congress of American Indians at several meetings of the United Nations Framework Convention on Climate Change, in Paris, France, in Bonn, Germany, in Katowice, Poland, and in Madrid, Spain. He has also participated in meetings of the World Intellectual Property Organization (WIPO) in Geneva, Switzerland.

Ms. Nuorgam is a long-term Sámi politician, who holds a Master of Law degree and is a currently a PhD student at the University of Lapland. She has been a member of the Sámi Parliament of Finland since 2000. Ms. Nuorgam is the Chair of Veahčanjárga Fishery. She has been working on reconciliation issues and now works as the Head of the Sámi Council’s Human Rights Unit. She is currently the chair of the United Nations Permanent Forum on Indigenous Issues.

Anandi Soans is the focal point of Indigenous Peoples’ fisheries in the FAO Indigenous Peoples Unit. Ms. Soans holds undergraduate degrees in Life Sciences, and, Food Science and Technology, and a Masters in Gastronomy. She has 18 years of experience working in the food industry and the social sector in Asia Oceania, South Asia and Europe. Ms. Soans was the South Asia coordinator for Slow Food International and co-created and implemented the Indigenous Terra Madre Network (ITM) globally. She worked on the planning and execution of the ITM events in Jokkmokk, Sweden (hosted by the Sámi people), and in Shillong, India (hosted by the Khasi, Garo, Jaintia people). She has since worked for the Maharashtra Government Nutrition Mission in Mumbai, and other development initiatives in India, before joining FAO in 2021.

Nicole Franz is a development economist with 18 years of experience in intergovernmental organizations. She holds a Master in International Cooperation and Project Design from University La Sapienza, Rome and a Master in Economic and Cultural Cooperation and Human Rights in the Mediterranean Region. From 2003 to 2008 she was a consultant for the Food and Agriculture Organization of the United Nations (FAO) and the International Fund for Agricultural Development (IFAD). In 2009-10 she was a Fishery Planning Analyst at the Organization for Economic Cooperation and Development (OECD), Paris, focusing on fisheries certification. Since 2011, she is in FAO, coordinating the implementation of the Voluntary Guidelines for Securing Sustainable Small-Scale Fisheries in the Context of Food Security and Poverty Eradication (SSF Guidelines) with a focus on inclusive policy processes and stakeholder empowerment. Since 2021 she leads the Equitable Livelihoods team.

An agricultural economist with a MABD on entitlements and food security, he is the Chief of the FAO Indigenous Peoples Unit. Mr. Fernández-de-Larrinoa joined FAO in 1998 as a policy officer, working later in Latin America and Asia, coordinating emergency operations in the tsunami, avian influenza, Peru earthquake and Haiti earthquake. In 2010, he joined the Partnerships and UN relations division leading the FAO Civil Society team, co-authoring the strategy to engage with civil society and supporting the participation of civil society in the World Committee of Food Security. Mr. Fernández-de-Larrinoa co-founded the Pastoralists Knowledge-Hub in FAO and started the FAO Indigenous Peoples Unit in 2014. In 2020 he started the Global-Hub on Indigenous Peoples´ Food Systems that he currently co-chairs.

Dalee Sambo Dorough (Inuit-Alaska) is the International Chair of the Inuit Circumpolar Council and former Associate Professor at University of Alaska Anchorage. Engaged for over 34 years at the UN, ILO, OAS and other international fora, she is a former Expert Member and Chairperson of the UNPFII and specializes in international Indigenous human rights law as well as political and legal relations between States and Indigenous peoples. Dr. Sambo Dorough holds a PhD from University of British Columbia, Faculty of Law (2002) and a Master of Arts in Law & Diplomacy from The Fletcher School at Tufts University (1991). Current areas of research include Arctic Indigenous peoples’ human rights, Arctic policy and Arctic related issues. She is also co-Chair of the International Law Association Committee on Implementation of the Rights of Indigenous Peoples.

Paul Sein Twa, is an indigenous Karen who grew up along the Thai-Burmese border and has spent his life navigating the zones of conflict. He is deeply connected to the physical, spiritual, and cultural landscape of the Salween River basin, and has dedicated his life to preserving its land and traditions, which are deeply intertwined for the Karen people. In 2001, he co-founded the Karen Environmental and Social Action Network (KESAN) in order to protect the environment and culture of the Karen community.

Liseth Escobar Aucu, is an economist and has a MSc in Amazonian studies from National University of Colombia. She is a member of the research group “Environment, History and Politics” in the same university. She has six years of experience working with the Indigenous Peoples of Tikuna, Cocama and Yagua in the Colombian amazon. Her research has been focused on environmental governance and artisanal fisheries management in wetland ecosystems.

Manuel Barange professional record includes several high-profile roles in the fisheries academic world: Deputy Chief Executive and Director of Science at the Plymouth Marine Laboratory, U.K., Chair of the ICES Science Committee, leader of the international IGBP GLOBEC programme, Head of the Surveys and Fish Behaviour Division of the Sea Fisheries Research Institute in Cape Town, South Africa. In recent years Prof. Barange has been very active in leading research on the development of quantitative tools to estimate the impacts of climate change on marine ecosystems, their resources, and their dependent communities, globally, regionally and nationally. He has published over 120 peer-reviewed papers and has edited several books. He has become an expert in understanding the two-way relationship between environmental and societal change. Prof. Barange holds an Honorary Professorship with the University of Exeter, U.K. and in 2010 was awarded the UNESCO-IOC Roger Revelle Medal for his accomplishments and contributions to ocean science.