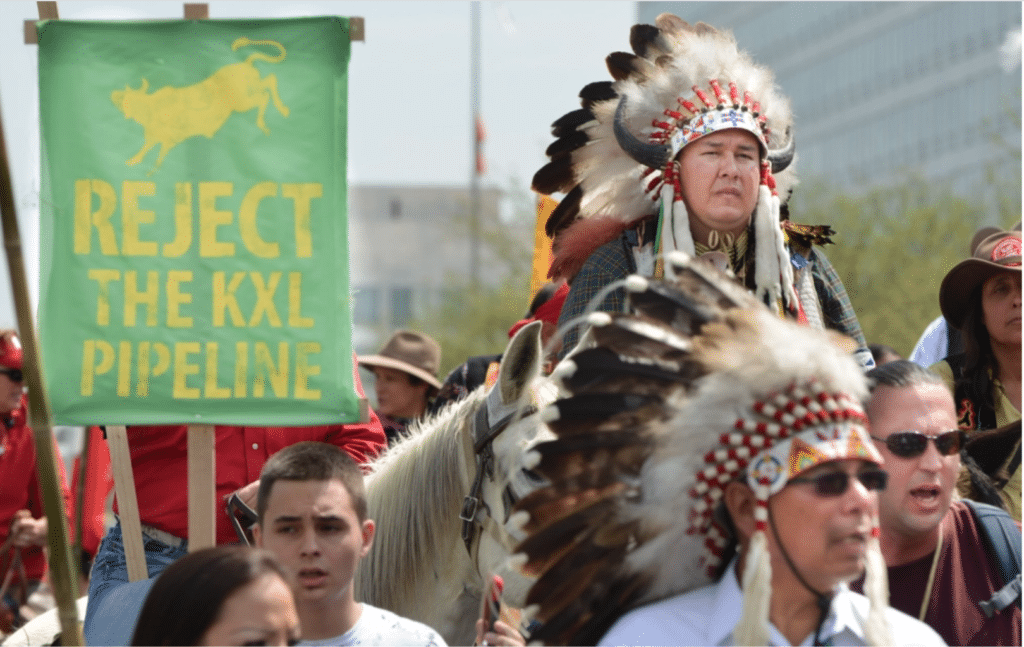 Indigenous Peoples from the US and Canada gathered in D.C. to oppose the proposed Keystone XL pipeline in 2014. Photo: Jay Mallin (17 U.S. Code § 107)

January 26, 2021, Oglala Lakota Nation, South Dakota: The International Indian Treaty Council (IITC) and Indigenous Treaty Nations on both sides of the United States/Canadian border welcome the Executive Order signed by US President Joseph R. Biden on January 20th, 2021, the first day of his presidency, canceling the permit for the Keystone XL Pipeline. The proposed pipeline was intended to carry up to 800,000 barrels a day of crude oil from the massive Tar Sands development in Northern Alberta Canada to refineries in Texas. Its 1200-mile route would have cut through the middle of the United States, crossing Oceti Sakowin Treaty Territory and the Oglala Aquifer which provides water for drinking and other purposes to Indigenous Nations, farmers and ranchers, wildlife, and millions of US residents.

In 2015, the administration of President Barack Obama denied a permit for construction in the US to TransCanada, the Canadian corporation in charge of the pipeline’s construction. On January 24th, 2017 incoming President Donald Trump issued a presidential memorandum to revive the construction of the pipeline, and a new permit was issued in March 2017. Construction was pushing ahead despite Indigenous Nations’ and environmentalists’ strong opposition and numerous court challenges.

The decision of the Biden Administration to cancel this permit is a demonstration of its commitment to transition away from fossil fuels in order to fight climate change. It was warmly welcomed by the Indigenous Nations whose Treaty Rights as well as water supplies were threatened. In a statement responding to the Executive Order, Chairman Harold Frazier of the Cheyenne River Sioux Nation stated, “I would like to say thank you to the President of the United States for acknowledging the danger this project poses to our land”. He added, “When decisions to keep such projects from damaging our environment today are made, we give our children a better opportunity tomorrow”.

The tar sands (also referred to as “oil sands”) development in Northern Alberta Canada, the source of the crude oil the Keystone XL Pipeline was intended to carry, has also been strongly opposed by the impacted Treaty Nations. In February 2008, Treaty Chiefs representing Treaties 6, 7, and 8 of Alberta Canada unanimously passed a resolution calling for a moratorium on new tar sands approvals, stating that “Oil sands development has all but destroyed the traditional livelihood of First Nations in the Northern Athabasca watershed”.

Likewise, the “Mother Earth Accord” was drafted and signed in an emergency meeting of Tribal Nation Treaty leaders from both sides of the US/Canada border September 15-16, 2011, hosted by the Rosebud Sioux Tribe in South Dakota along Keystone XL’s proposed route. Indigenous Nations, the IITC, and other Indigenous Peoples’ organizations around the world also signed on to the Accord which reiterated the call for a moratorium on tar sands development, urged the US and Canada to transition to sustainable energy sources and away from fossil fuels, and called on the Obama Administration to deny TransCanada’s permit for construction in the United States.

One of the Treaty Nation leaders from Canada who organized this unified initiative was Bill Erasmus who served as Chief of the Dene Nation in the Northwest Territories for over 30 years. The Dene Nation is downstream from the tar sands development and as Dene Nation Chief, Bill Erasmus consistently presented the devastating impacts of runoffs from the tar sands tailings ponds on water sources, fish, wildlife, and human health in many national and international gatherings. He welcomed the pending decision by the Biden Administration in a statement on January 19th, 2021 affirming that “Our Peoples’ lands north of the tar sands are being contaminated. This goes through the water system all the way to the circumpolar Arctic”. Responding to the objections being raised by some businesses, local and provincial governments in Canada, also echoed by similar sectors in the US, stating that halting the Keystone XL pipeline construction would cost jobs he responded, “I really think that short-term jobs are not worth polluting the Arctic and affecting our People in a negative way”.

Phil Two Eagle, Executive Director of IITC affiliate Sicangu Treaty Council, Rosebud Nation, called this decision a victory for Mother Earth and for Treaty Rights. “President Joe Biden took a step towards honoring the Treaties that were signed by the US Federal Government and our great grandfathers, the chiefs that signed the Fort Laramie Treaties of 1851 and 1868,” he said.

Bill Means, co-founder and Board member of the International Indian Treaty Council and representative of the Black Hills Sioux Nation Council, Oglala Lakota Nation, confirmed that the right to consent is affirmed in the 1868 Ft. Laramie Treaty between the Oceti Sakowin (aka the “Great Sioux Nation”) and the US, and that the impacted Treaty Nations had never given their consent to this project. “It is not a question of if, but when oil pipelines will leak. Promises of so-called economic development and a few jobs, which usually don’t even go to the Indians, are not worth sacrificing our sacred waters and the health of our future generations. We will continue to say no to the Keystone XL and other projects that threaten our lands, waters, and Nations and contribute to the climate crisis we are now facing. We appreciate the Biden administration’s decision and look forward to working with them so that our Treaty rights will continue to be upheld going forward”.